Diabetes made simple for a First Aider

Diabetes is more common than ever, so as a First Aider we should know how to deal with someone with Diabetes if they need help. This is very simple information and is not supposed to be an in depth document. 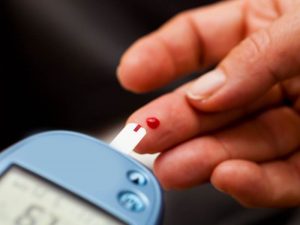 The body’s inability to produce the correct amount of the hormone insulin which essentially balances out the amount of sugar someone ingests. Insulin also allows the body to access sugar to be used to feed muscles. Insulin is a bit like the key to unlock the door to the sugar cupboard.

Too much sugar – Hyperglycaemia (high)

This takes a long time (days or even weeks) to get to dangerously high levels, so the level of hyperglycaemia witnessed by any first aider is rarely likely to be that severe. However, with moderate hyperglycaemia (due to perhaps missing an insulin injection, or suffering with a systemic illness eg a bad cold, or due to over-eating carbohydrates over the last couple of days), the diabetic person will feel unwell and his/her muscles won’t be working very well because there isn’t sufficient insulin on-board to ‘unlock the sugar cupboard’.  The person will be aware that he/she has mismanaged their diabetes, but because they have lots of sugar in their body, their brain will function correctly and they should be able to manage the situation themselves.

The signs and symptoms can come on very quickly, sometimes less than 10 minutes, that’s why this is a medical condition which a First Aider should be ready to help with.

What we can do:

Once their blood sugar levels increase the brain will have some fuel and they will then be able to manage the situation themselves, help them if they need it, but remember, they will know more about how to manage their diabetes than you do, so just assist them!

Don’t worry about the difference between the two types this does not matter for us as first aiders – this is about keeping it simple.

Does their breath smell of pear drops if they have a hypoglycaemic episode?

No, it won’t necessarily smell of anything in particular. However, someone who is clearly unwell and whose performance is lacking, could be a poorly-controlled diabetic, who is suffering from hyperglycaemia (too much sugar), and in that case, his or her breath will smell of pear-drops, because of the high level of circulating ketones (ketones are produced by the liver if the body starts to metabolise fat instead of carbohydrate because of the insufficient amount of insulin on-board). An individual who is ketotic should not be exercising, so if hyperglycaemia/ketosis is suspected, the sufferer should be advised to drink plenty of water and return to base in order to stabilise his/her condition.

I’d like to thank my good friend Ellie who helped me put this simple information together, by day she is a vet and in the evenings and weekends she an amazing athelete with over a hundred mountain marathons under her belt as well as tens of thousands of miles on her mountain bike and road bike. She is diabetic herself and shares the passion of keeping information straight forward and simple so First Aiders can be even better at helping others. Thanks Ellie x